We live and know the Real Grenadines!

The island of Bequia has a tropical climate, which means that the weather is consistently warm throughout the year.  Maximum daily temperatures only vary across the 12 months by around 4 degrees from 29 to 33 Celsius (84-91F), with the hottest and wettest months falling in August & September.  But any time of the year is wonderful here, with cool breezes especially on the east coast and up on the numerous hilly points of the island.  There is no bad time to visit, being far enough south to avoid any passing hurricanes (the last one to hit with full force was 1898).

Don't just think about the typical Caribbean tourist season of November to April, as some of the best times to visit are during the summer months of June, July & August when all of the island's beautiful flora is in full bloom, the fruit crops are prolific and everyone is knee deep in mangos!  Also, rental rates do drop significantly in the summer months and you will have some of the Caribbean's best beaches to yourself.  Time to sip on a rum punch, lie back and relax!

January - A really fantastic time to visit Bequia, not least because of low rainfall, plenty of sun and temperatures in the mid-80’s.  January is right in the heart of the beautiful Caribbean winter, the island is buzzing (but never overcrowded) and there’s lots to keep you entertained!  Above & beyond the numerous year-round activities, Bequia’s Mount Gay Music Festival lights up the island so expect a feast of live music at various venues & there’s also the blues festival on the neighbouring island of Mustique.

February – Climate as per January and above & beyond the numerous year-round activities, there’s also Fashion Caribbean and the Primary School Performing Arts festival.

May -  This is a really fantastic time to visit Bequia, not least because of low rainfall, plenty of sun and temperatures peaking at 90 degrees.  May marks the start of the beautiful Caribbean spring, there are less tourists (and more chance of beach to yourself!) and there’s lots to keep you entertained.  Above & beyond the numerous year-round activities, there’s also the Regattas taking place on the neighbouring Grenadine islands of Mayreau & Canouan.

June/July - It's summer in Bequia, when all the beutiful flora is in full bloom, the fruit crops are prolific and the island is lush & green.  With June/July comes "Vincy Mas" - the St. Vincent & the Grenadines Carnival with colourful costumes, calypso, steel pans & street parties!  If you miss Vincy Mas, you may be around for Fisherman's Day so why not compete with the locals to catch the biggest fish!

August – All the benefits that the summer climate brings and above & beyond the numerous year-round activities, there’s also the Breadfruit Festival – tasty!

September –As per August, but replace the Breadfruit Festival with the National Dance Festival.

October - It's the start of Autumn in Bequia & activities include the Independence Cycling Competition & it's Bible Fest.

November - Before moving to the island, we visited at this time of year to escape the harsh UK winter and the chaos of the Christmas build-up back home.  It's also a month when humidity is low and the breeze feels so nice.  Activities include the Theatre Arts Festival & it's Tourism Month so you will recieve an even warmer welcome than normal (if that's even possible!)

December – We are now right in the heart of the beautiful Caribbean winter, the island is buzzing (but never overcrowded) and there’s lots to keep you entertained!  Above & beyond the numerous year-round activities, there’s also the National Nine Morning Festival running from 16th Dec to Christmas Eve.  During this time, Vincentians awake in the early hours (4am) and take part in activities including concerts, dances, bicycle riding and sea baths.  the only thing that is missing from Christmas on Bequia in the snow!  The Christmas spirit is the same on the island as anywhere else in the world - good will, season's greetings and Christmas cheer are found in abundance.  Also, just imagine a New Year's Eve in Bequia with an unforgettable firework display in the harbour - truly spectacular!

We are Chris & Louise, a young (ish!) couple with a love & passion for beautiful Bequia. As Chief Enthusiasts for Blue Grenadines, we are making it our mission to spread the word, share our passion and ensure that your stay on Bequia will create amazing memories that will last a lifetime! Please explore our website and do not hesitate to contact us about our accommodation options and the island in general. We are passionate ambassadors for Bequia and will be more than happy to help. 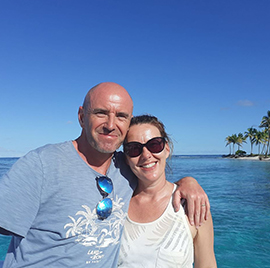